The Washington Huskies are the only undefeated team in the Pac-12 at 9-0 and will play the 5-4 Arizona Wildcats tonight.  The Huskies are riding an 11 game winning streak into Tucson while the Cats have lost 3 games in a row and 4 of their last 5.

Offense:  Washington is basically 8 players deep and there is some question as to whether starting Forward/Center Noah Dickerson will play or not due to an injury he suffered in their previous game.  The Huskies would most likely sub in backup Center Sam Timmins, a 6’11” junior who averages 11 minutes, 2.4 points, and 2.6 rebounds per game.  They could elect to go smaller and start 6’6″ senior Forward Dominic Green who averages 23 minutes, 7 points, and 3 rebounds.  Both Timmins and Green should see increased minutes if Dickerson can’t go.  Sophomore Forward Nahziah Carter (nephew of hip-hop legend Jay-Z) would likely also help with additional time.  He is currently averaging 21 minutes, 8.4 points, and 3.1 rebounds.

The Huskies are 1st in the Pac-12 shooting a very impressive 42% from 3.  The Cats are 3rd in the league at 37%.  The Huskies are, however, also 1st in the league in defensive 3-point percentage allowing opposing teams to shoot only 29% from 3 against them.  They have an extremely well balanced offense and are a veteran team.  Nowell and Carter seem to get to the basket with ease and Nowell is having an incredible season shooting 45% from 3 which is 2nd best in the Pac-12.  Crisp is right behind him at 39% and Dom Green not far behind that at 36%.

Washington is averaging 74 points per game in league play while the Cats are averaging 73.3.  It looks like the Cats will once again be without top freshman Brandon Williams due to a sprained knee.  He is out indefinitely and is expected to miss at least these next two games against the Washington schools with a possible return against Utah next week.  The Cats played extremely well without him last game in their overtime loss to Arizona State in which they shot a blistering 50% from 3-point range.  6’10” Junior Forward Chase Jeter also returned that game after missing a few due to an injury.  It might have been the Cat’s best game–in the effort category–of the season even though they lost.  But the question always remains for every basketball team:  What do you do when the shots aren’t falling?  That will be the challenge tonight as Arizona goes up against the best defense in the Pac-12.  Points will have to be “manufactured” by trying to get the Huskies in foul trouble and getting to the line as often as possible. The Cats are one of the better free throw shooting teams in the country (48th in the NCAA at 74%) and should look to exploit that in a game where good looks are most likely going to be sparse.  Despite their good size and excellent athleticism, Washington is not a particularly great rebounding team and surprisingly enough Arizona is 2nd in the league in offensive rebounds (averaging 12.3 per game) despite being a physically undersized team. 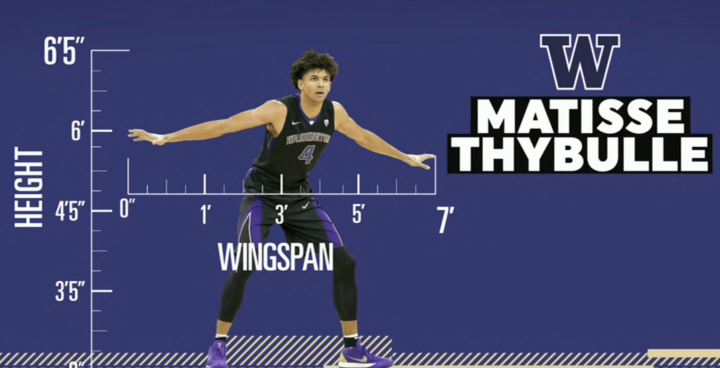 Defense:  Washington Coach Mike Hopkins brought with him from Syracuse the Orangemen’s famed 2-3 extended zone.  The Syracuse zone was sitting around waiting…and waiting…waiting…and waiting…for Matisse Thybulle to come along.  Thybulle, with his go-go-gadget arms and his preternatural defensive instincts, is #1 in the NCAA with 70 total steals and is averaging 3.6 steals per game in league play, plus countless deflections.  In their previous game against UCLA, the Huskies forced the Bruins into 22 turnovers with 14 steals, 7 of those steals coming from Thybulle. I love Thybulle and I think he could be the Pac-12’s next Kyle Kuzma–a slightly overlooked 4 year player ready to transition right into the next level of play.  He isn’t a big time scorer but his ability and talent, I think, will translate well into the NBA game.

Coach Sean Miller will have his hands full against this Pesky Husky defense as the Cats have struggled most of the year against zone defenses.  The 2-3 zone will at times look like a 4-1 zone as the wings come out very high and wide to challenge passes and shots.  But like all 2-3 zones it is vulnerable at the high post, corners, and mid-baseline areas.  Those are also the areas where quick decisions will need to be made as they are susceptible to being “trapped” by a double or even triple team.  The Cats aren’t really a transition team but one way to beat a great zone is not to let it set up by getting down the court for some quick shots.  It can lead to some out of control play but looking for some decent “early clock” shots could go a long way towards neutralizing the 2-3 zone.

The Huskies, at this point, seem a shoe-in to make the NCAA tournament.  Arizona, however, is currently at risk of not making the postseason NCAA tournament in March.  A win tonight against Washington would go a long way towards keeping that hope alive.