It is the best of times.  It is the worst of times.  We’ve made it to the last game of the conference season intact–somewhat.  Seedings and rankings and rivalries…oh my!  No longer can we keep the Madness at bay.  I can’t help but feel sadness knowing the music and the dance will soon come to an end.  But there is always another season, for it was indeed a madcap, a madman, who expanded upon the idea of an eternal return and the idea that one must learn to love one’s fate, amor fati.

Today, fate has brought the Devils and the Wildcats together for one last Tango…in Tucson.

It was the good Dr. Thompson who once warned that the menace is loose again.  That menace has a name: The Arizona State Sun Devils.   The Devils have been my favorite Pac-12 team to watch this season.  At their best they could beat Duke by 10.  At their worst they could lose to Duquesne by 15.  They are…the most interesting team in college basketball. 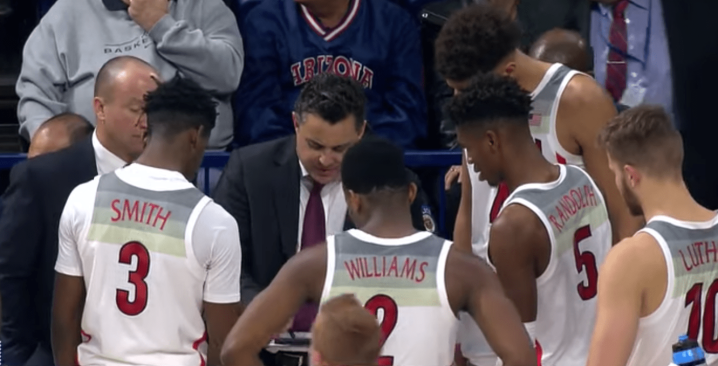 The Devils play at a pretty fast pace and are 27th in the NCAA in Possessions Per Game at 75.4.  They are 3rd in the Pac-12 with a 76.7 points per game average.  They get a lot of shots up and they get to the line regularly–about 24 times per game.  The Wildcats are shooting around 18 free throw attempts per game.

Remy Martin is shooting 40% from 3-point range in league play and Rob Edwards has a  38% 3-point shooting percentage.  Martin, Edwards, and Dort all average 5 3-point attempts per game in league play.  Dort, however, shoots only 28% and is 2nd in the league in free throw attempts which once again raises the question:  Why not let Dort shoot?  It’s better than him getting into the lane and near the basket.  It’s not seen much in defense against guards, but Arizona might be better off not guarding him past 16 feet and letting him shoot all he wants.  The risks would be him getting hot or ASU cleaning up all those offensive rebounds for second chance opportunities.

For the Cats, Dylan Smith, Brandon Williams, and Ryan Luther are all still shooting at close to 40% from 3-point range.  In their last matchup in Tempe where the Sun Devils won in overtime, the Cats shot 28 3’s and made 14 of them.  In that game Remy Martin let loose for 31 points while Zylan Cheatham grabbed 22 rebounds.

There are always many factors involved in winning and losing, but one interesting stat for the Wildcats is that they are 10-1 on the season when they attempt 20 or less 3 point shots for the game.  That only loss being to Washington–a game in which they had 20 turnovers, their most of the season.

Arizona is allowing 70 points per game while ASU is at 74.  The Cats are 1st in the Pac-12 only allowing their opponents to get 8 offensive rebounds per game while the Sun Devils are 11th in the league allowing 11 per game.  ASU has the best defense in the conference at opponents field goal percentage allowing teams to shoot only 42% against them.

Arizona is coming off its lowest scoring game of the season.  They only managed 47 points against Oregon in Eugene.  There are currently 4 teams in 4th place in the Pac-12 with ASU holding down 2nd place at 11-6.  They have secured a 1st round bye in the Pac-12 tournament regardless of the outcome of this game.  For the battle of Arizona, however, the statistics and the records and seeding take a back seat as they usually do in all in-state rivalries.  Bobby Hurley recently got his 1st win against Arizona and Sean Miller.  This is the best team he’s had in Tempe and is one that, if playing well, could make a deep run in the NCAA tournament.  They really have it all.  Shooting, athleticism, decent size and post play.  Their strength is in their guards and wing players and–as is always the speculation come March–those are the types of teams that get to play into April.